During the 1960s and 1970s, the club was continually plagued by the lack of a permanent and adequate meeting place.

Most often, members met in a large dining room at the Harvest House Hotel, now the Millennium Hotel on 28th Street, but frequently had to give up that space when conventions were meeting there. They tried other places, such as the Roman Arches restaurant, the Broker Inn, and the Elks Club, which became the regular meeting place in May 1981.

In August 1996, the club moved its meetings to the event center at Flatirons Golf Club at 5706 E. Arapahoe Ave., then called Angel Pines Country Club. The RiB enthused after its first meeting there, “Our new quarters are bright, new, and sparkling clean! The tables are covered with snowy white tablecloths, and there are real cloth napkins! The first meal was very good, as might have been expected. Most of all, the staff seemed genuinely glad to have us.” 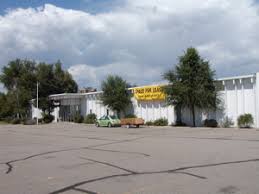 The venue later became known as the Spice of Life Event Center, home of the catering business by that name. The catastrophic flood that hit Boulder in September 2013 seriously damaged and closed down the Event Center, although Spice of Life has continued to operate as a caterer and remains as Rotary’s food provider.

After the flood Rotary moved east to 6185 E. Arapahoe, meeting at the Avalon Ballroom for four years, setting up our tables on the dance floor with white drapery overhead and a decorative pair of red stiletto dance shoes and a disco ball hanging from the ceiling.

After completion of the Jewish Community Center in 2016, across the street from the Avalon, the club moved there and has enjoyed its sunny and comfortable meeting room ever since. And we continue to enjoy lunch from Spice of Life!