The good works we do won’t happen without a few bucks to fund them. Raising money has always been part of the routine for Boulder Rotary.

In our 75th anniversary year of 1994, a Boulder Rotary Club Foundation was established, increasing the club’s ability to maintain a fixed budget for community service. As Bob Stuenkel, president in 1994-95, remembers, the “quietly effective leadership” of Steve Whitehead, BRC president in 1992-93, was key to establishing the foundation. Its donors are now honored as Steve Whitehead Fellows.

During Don James’s year as president, 2005-06, the Club and Foundation boards collaborated to develop a Major Grant program. The first grant of $120,000 over three years was made in 2006 to Crayons to Calculators.

Our Signature Events and other fundraisers have benefited numerous projects and good works, including Shelter Boxes; Blue Star Recyclers; international projects in Mante, Mexico, and Kisumu, Kenya; Adelante! at Boulder High School; and many others.

Also, starting with collecting coins for the March of Dimes in the 1950s, Boulder Rotary stepped up to help eradicate polio. In 1988, Rotary International mobilized worldwide to immunize children through Polio Plus. Canisters placed at businesses and restaurants collected coins. A Boulder Rotary campaign in 2002-2003, Sow the Seeds of Love, included projects such as Rotary license plates and a fundraiser by all three local clubs reenacting “The Trial of Alferd Packer,” subtitled, “All he did was have a friend for lunch.”

To date, Rotary International reports that BRC has contributed “an estimated $225,834.58” to Polio Plus. That’s a very precise estimate! RI has contributed more than $1.7 billion to polio, including matching funds from the Gates Foundation, as well as countless volunteer hours, to protect more than 2.5 billion children in 122 countries worldwide. Just a couple of weeks ago, President Mike Brady modeled his red “Stomp Out Polio” shoes at a club meeting! 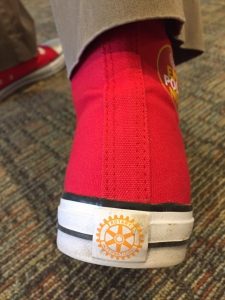